CORONA / COVID-19 INFO: You can find all specific important information on this topic HERE

There are several automated lighthouses in Bornholm. Due to the central location of the island in the Baltic Sea, it was necessary to build lighthouses at various points in order to facilitate shipping traffic at sea.

The Hammeren and Hammerodde lighthouses - both on the northern tip of the island, called Hammeren - gave many ships a safe route around the cliffs of northern Bornholm. The island also offers the impressive Dueodde lighthouse at the southern tip of Bornholm, next to Dueodde beach - Denmark's tallest lighthouse.

Some of Bornholm's lighthouses are partially closed but provide a good photo opportunity. Only two of them are open to tourists and can be visited, Hammeren Lighthouse and Dueodde Lighthouse. 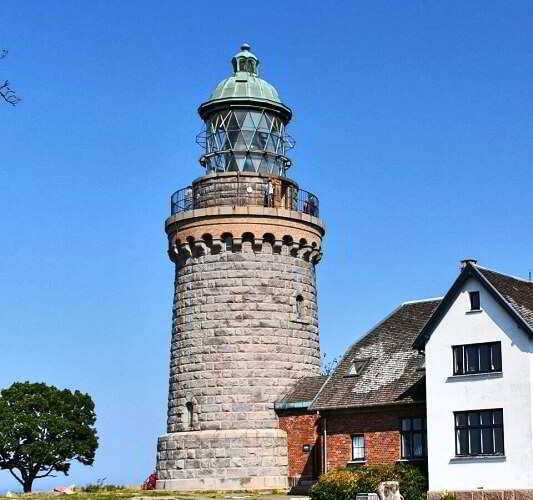 Hammeren Lighthouse is the oldest lighthouse on Bornholm. The imposing structure stands on the granite Hammeren massif at the northern tip of the island, and is built of the same granite rock it stands on. Due to its very massive structure, it is also called Store Fyr, which means a large lighthouse.

The round lighthouse was put into use in 1871. Soon after its construction was completed, it turned out that the location of the lighthouse was not ideal. Low-hanging clouds and fog made it sometimes unsuitable for illuminating the road for ships. Therefore, in 1895 it was decided to build the smaller Hammerodde Fyr lighthouse directly on top of Hammeren. You can still see near the lighthouse from where workers removed the granite blocks to build the Hammeren lighthouse.

Hammer is 21 meters high. From the lighthouse viewing platform, with good visibility, the visitor has a unique view of the southern coast of Sweden and, right above the ruins of Hammershus Castle, a fantastic view of the entire island.

The lighthouse was closed in 1990 due to its inconvenient location. Soon after, it was handed over to the nature protection office.

The tower is now operated by the owners at their own expense. Visiting the viewing platform is free of charge.

The Hammerodde lighthouse is also called "little fire" in reference to the older Hammeren lighthouse and is located at the northernmost point of Bornholm. It is an integral part and a popular photographic motive for trips to the northern tip of Bornholm.

From 1939, its light was also supplemented by a beacon. From Hammerodde lighthouse, all lighthouses on the island are electronically controlled.
This lighthouse is not open to the public.

Light height is 21 meters above water, building height 12 meters. The lighthouse can be seen from a distance of 18 nautical miles. 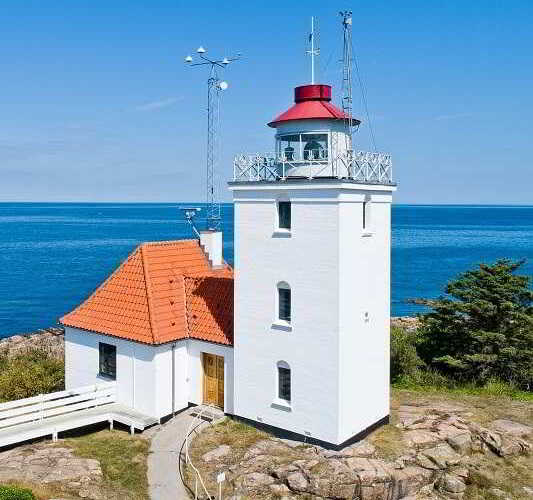 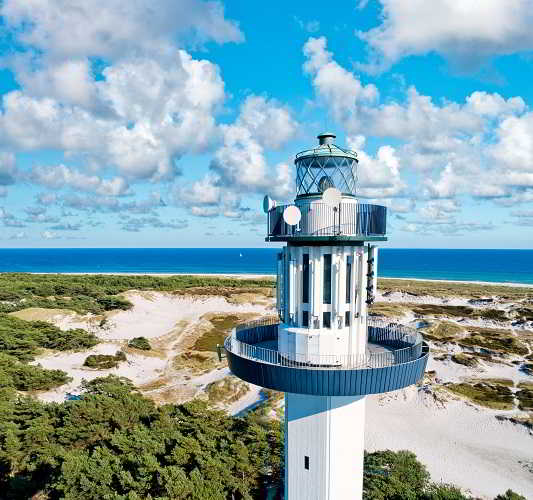 Dueodde lighthouse, the white and blue lighthouse, is Bornholm's tallest lighthouse at 48 meters. If you park your car in the main car park in Dueodde, you will reach the lighthouse after a few minutes' walk along the street towards the west. Tourists who are not afraid of the steep 196 steps and an entrance fee of DKK 10 will be rewarded with a wonderful view.

To the south, at the foot of the lighthouse, there is a wonderful landscape of dunes and moors, a strip of grass and a wide beach. When the visibility is good, you can look north to Bornholm's highest point, Rytterknægten, which is in the center of the island.

A fairly modern-looking tower was commissioned in 1962 and switched to automatic operation in 1977. The height of the light is 48.5 meters, the range is 20.5 nautical miles.

From the deck of the ferry entering the port of Rønne, the characteristic white lighthouse is visible from afar. It stands on a hill right above the harbor basin. The tower is octagonal in shape, made of iron, and replicates the lighthouse at the port of Ystad in southern Sweden.

The lighthouse was built in 1880 and operated until 1989, it served as a guiding light at the port entrance. The height of the light was 24 meters, and the tower itself is 12 meters high. 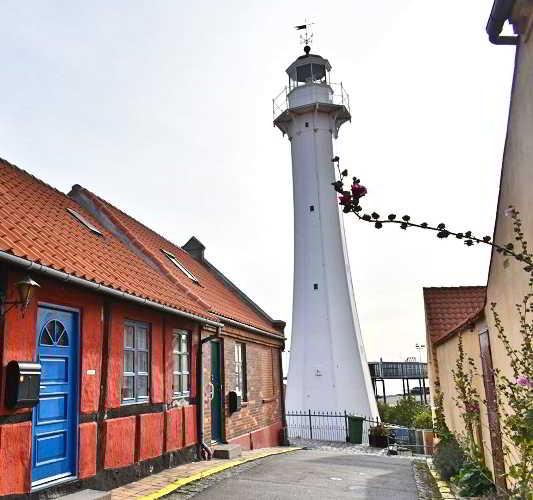 Below the white lighthouse stands a lighthouse on the old pier that served as the lower light for the Bag overhead light. It is a small granite tower 9 meters high and 11 meters high of the light. The tower, which was put into service in 1930, is no longer used.

Svaneke Lighthouse, opened in 1920, stands on the Sandkås Odde peninsula south of the port. The square tower is 18 meters high and is visible from afar thanks to the red roof. The height of the light is given as 20 meters and the range is 19 nautical miles. The tower has been closed since 2010. In 1947, the tower, like most of the island, was electrified. 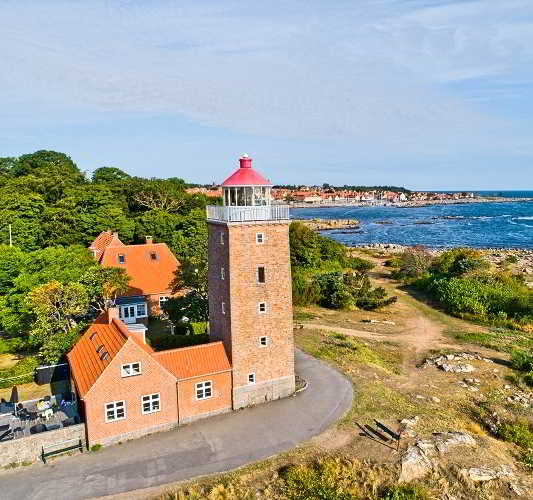 There are also two lighthouses on the small pea islands east of Bornholm. On Christiansø, a lighthouse was built in 1808 in the large tower of the fortress built in 1684. In the summer months, you can visit the tower for a fee.

The tower is 16 meters high, but together with the height of the rock, it gives a lumen height of 29 meters. The range is 18 nautical miles.