Castles and fortifications on the island of Bornholm

The many historic castles, trenches and fortifications on Bornholm bear witness to the island's long history. Today they are popular attractions on the island. Due to its central location in the Baltic Sea, Bornholm has been the scene of many battles and looting.

In addition to the ruins of Hammershus Castle, there are Lilleborg & Gamleborg in Almindingen forest, Gamleborg at Paradisbakkerne, Rispebjerg fortress walls, Christiansø fortress island, fortifications at Rønne, Storeborg walls near Rø, Borgvolden ramparts at Rø Plantation and many other small ramparts and fortifications around the island. The round churches of Bornholm were also small castles that served to protect the population.

Hammershus is the most impressive medieval castle ruin on Bornholm and a popular excursion destination. Just off the road from Vang to Sandvig, Hammershus offers its visitors impressive views. In the 12th century, the construction of a fortress began on this site. Over the centuries it has developed into an almost unique fortress, surrounded on three sides by steep rock walls. The castle was the seat of church dignitaries until the Lubeckers occupied Bornholm in 1522. In 1658 Bornholm and with it the castle became Swedish territory. This period was short-lived, and a year later the Danes ruled Hammershus again. The castle flourished in the 16th century.

From 1743 no ruler lived in the castle anymore, which caused the decline of the building, which could only be stopped in 1822, when it was placed under protection. The building is currently undergoing extensive restoration. 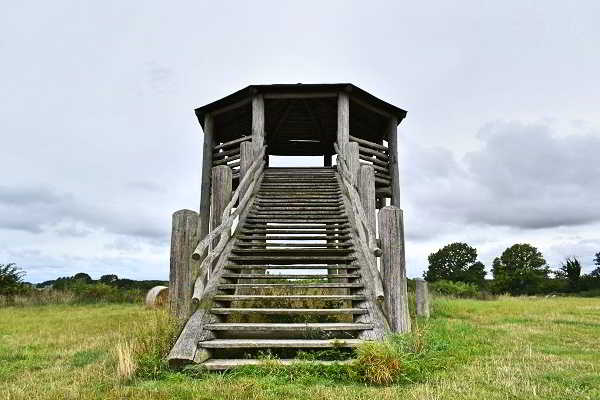 The wall system at Rispebjerg is Bornholm's oldest fortress, east of Pedersker on the Øle Å River, where ritual acts took place on the site as early as the Stone Age. It is believed to have been a temple to the sun. In the Iron Age around 100-300 AD the temple became a fortification to protect the local population from attacks by robbers. It was a defensive rampart with a palisade fence, towers, and a walkway. The whole was surrounded by a moat. On one side the whole complex was protected by the river.

Today, unfortunately, there is not much to see as all the wooden fixings have long since rotted away. The defensive walls are still clearly visible. In addition, the location and size of the buildings are marked in several places. 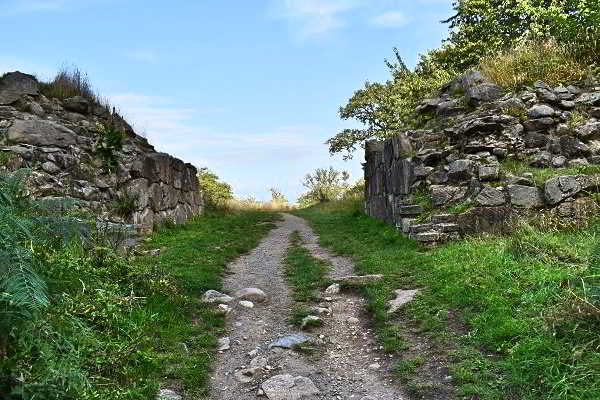 The remains of Gamleborg Castle are located in the Almindingen forest area. This castle was the first massive castle complex on Bornholm, built at the time of the Great Migration around 750, as a refuge for people from other Viking tribes, Gamleborg was at its peak before Lilleborg, during the Viking Age between 800 and 1100. At that time it was the main fortress of the island and the seat of the king. The structure measures 264 x 110 m.

Around 1100 the castle was again heavily fortified before it was abandoned in favor of the new Lilleborg Castle, which was built just 700 meters away. The reason for this is not known. At this time the Almindingen area was not yet forested. Rather it was a less wooded, hilly area with heathland and lakes, valleys, and boulders. Because of its wealth, Bornholm was often visited by foreign troops. People also sought protection here in case of natural disasters.

Today you can still admire some of the remains of the foundation walls. The earth wall is located on the northern, western, and southern edges of the former castle. On the other hand, the eastern side is very steep and provides good protection against attackers. The great northern gate is still clearly visible. In the first period of the castle's construction, there was also a south gate here, which was later closed and replaced by a gate on the southwest side. As almost no archaeological finds have been discovered in the complex, it is assumed that it was used for raids. Apparently, the castle was not inhabited at all times.

Lilleborg (Little Castle) replaced Gamleborg as the royal fortress on Bornholm in the 12th century. However, the size of the two systems was difficult to compare. Nevertheless, Lilleborg was also a defensive fortress. In the early Middle Ages, it served the king as the center of secular power on Bornholm and was thus an alternative to Hammershus Castle and Church, which was the archbishop's fortress in the north of the island.

Archaeological finds of coins from the time of Knut Magnusson (1146-57) and his successor Valdemar I (1157-82) attest to the age of the castle. It is also assumed that one of them must have resided in the castle. In 1259, after being captured by the king's archbishop Jakob Erlandsen, it was destroyed by an attack with the support of Prince Jaromar of the island of Rugia. This was the result of an ongoing power struggle between the church and the king on the island. During the excavations, in addition to weapons and fire marks, other coins were found, suggesting that the site must have been inhabited later. So it seems that it was not completely destroyed but gradually deteriorated over the years.

Borgesøen is a lake in the immediate vicinity of the remains of the fortress. At that time it served as part of the defense system, covering the entire 16-meter-high hill at the time. The only passage was a wooden bridge. On the ring wall, the entrance to the castle was guarded by a 9.5 x 9.5 m corner tower. From this point on it was possible to fight enemies from all sides. The castle walls were 2.40 m thick. Further walls led down to the lake and were probably built to secure the water supply, as the castle had no well.

Today the remains of the castle, which are located on the hill, are easily accessible from the road from Ronne to Svaneke, these are the foundation walls that once surrounded the top of the hill for a length of 76 m.

Paradisbakkerne is a wooded hillside area in the east of Bornholm. The very varied landscape and the interesting area include gorges, rocky outcrops, heathland and lakes, and the ruins of an old castle. The protective castle, also known as Gamleborg, dates back to around 400 AD when various peoples and tribes migrated across Europe in search of new land. This migration of peoples also resulted in clashes between local people and outsiders. Gamleborg was built to protect the people of Bornholm. Located on a 14-meter high rock, the site was difficult to access. Archaeological findings suggest that the castle was built around 800 AD.

Today you can still find some stone walls and foundations. 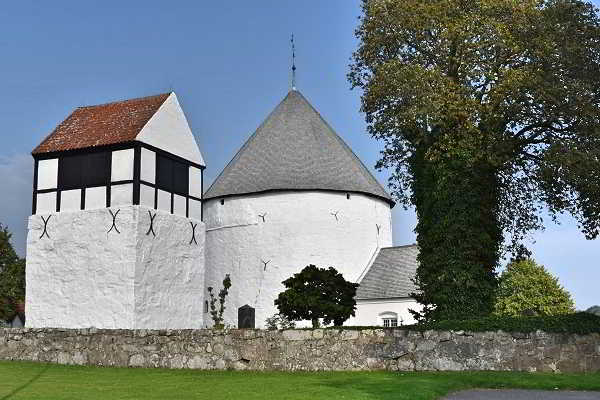 The round churches on Bornholm are probably the most interesting fortifications on the island. As well as being places of worship, they were also shelters for the people of Bornholm during attacks. At almost the same time, in the mid-12th century, four-round churches were built evenly across the island. The churches were never built directly on the coast and always in strategically clever places, such as small fortresses. The round church building had a flat roof with a circular run. So the defenders could use the church as an observation point and defend it well. The church itself had only very small and narrow windows. The entrances to the upper floors were easy to defend. 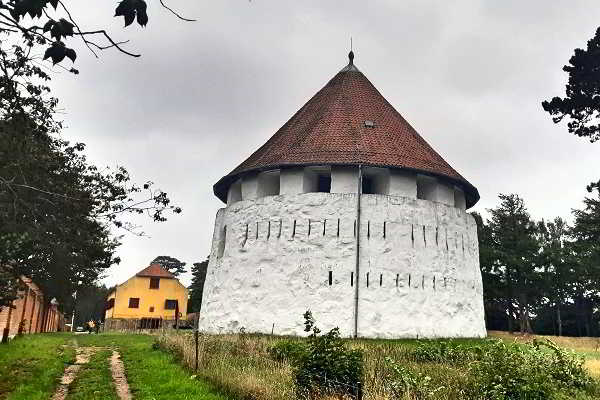 At the end of the 18th century, at a time of constant power struggles in the Baltic region, King Frederik V of Denmark decided to expand the city of Rønne into a fortress. A seaport was planned to protect the Danish fleet from Swedish attacks and a fortress-like curtain wall surrounded the entire town. Ambitious building work began in 1687, but the project was never fully realized as construction was halted in 1789. By this time, Rønne had built various moats and a gun tower in the south of the city. This tower (Kastellet) looks very similar to the round churches of Bornholm, as it is whitewashed. An identical example is Lille Tårn on the Pea Islands - Ertholmene.

The fort was equipped with 10 large cannons on the top floor and was used as a powder magazine. In addition, various other buildings were built in 1816, which are surrounded by a large wall and now house the Bornholm Defence Museum.

Bastions on Bornholm were used to defend the natural harbors to prevent enemy troops from landing on the island. They can be found all along the coastline, for example at Arnager Bay in Bølshavn, Gulhals Batteri and Malkeværnskansen between Årsdale and Nexø, Hasle - Helligpeder Skanse, Kanondalen Rønne (Rønne Fortress), Langeskanse near Balki, Sandvig Batteri, Sose Odde, Svaneke Skanser and St. Myregård (Arnager). Not all the ramparts were built at the same time. Some date from the 15th and 16th centuries. The Svaneke Skanser facility right next to the smokehouse in Svaneke is particularly worth seeing. These were built to protect the harbor a little further south from foreign ships. Originally there were north and east batteries north of the harbor, as well as a watch battery and two more batteries south of Svaneke harbor. At the turn of the 18th and 19th centuries, 11 guns were stationed there. During this time, English warships in particular were fired upon.

The cannon battery at Dueodde plays a special role among Bornholm's fortifications. It is not a defensive installation like all the others, but a German artillery position with bunkers that were built by the German Wehrmacht in the south of Bornholm in 1942 during World War II. From there, the German occupiers wanted to control all ship movements in the Baltic Sea.

As planned, the huge facility was never completed and never saw cannons. Nevertheless, you can see the huge bunkers in the pine forest of Dueodde. 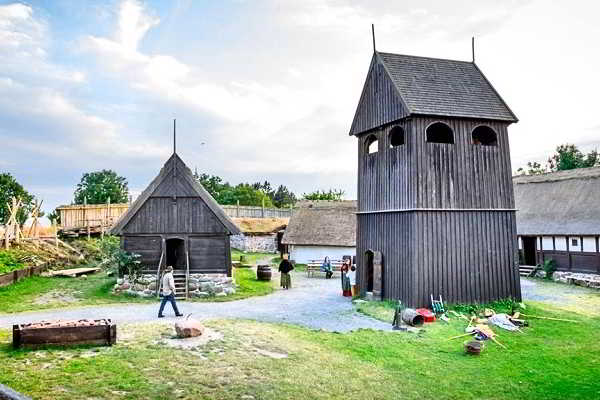 The Medieval Centre of Bornholm is a theme park with no specific historical reference. Nevertheless, it offers an unparalleled insight into life on Bornholm between the 11th and 13th centuries, as well as the architecture of the medieval fortress. All the buildings are based on historical models.

As well as a medieval village with stables, houses, a smithy and other workshops, there is also a wooden defensive castle, comparable to the one on Rispebjerg, with a tower, other buildings and a circular track on the fence. The impressive shooting demonstrations are particularly popular with young and old. 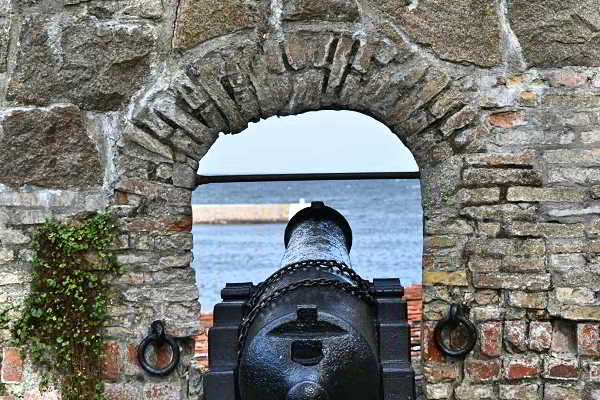 Christiansø fortress is not on Bornholm, but on the Pea Islands to the east. Ertholmene, as they are called in Danish, can only be reached via Bornholm. The fortifications of Christiansø are very worth seeing, as the whole island has been covered by fortifications. The fortress on Christiansø has its origins in 1684 when Danish King Christian V decided to expand the archipelago's natural harbor.

The defense towers, walls, and ramparts were erected in a very short time under the supervision of the Norwegian engineer Anthon Coucheron and 450 workers. The fortress underwent its greatest acid test in 1808 when English warships attacked the military harbor in order to sink Danish corsairs. The attempted attack failed. In addition to serving as a port and fortress, the Pea Islands also served as a prison island due to their isolated location. Many famous prisoners were imprisoned on the barren rocky islands.

Today you can take day trips from Bornholm to the Pea Islands and visit the well-preserved fortifications.