Rønne Information about the Capital of Bornholm

On the west of Bornholm lies the harbor town of Rønne, the capital of the island. It is the largest city on Bornholm, with just under 14,000 inhabitants, approximately one-third of the island's population.

Many historical monuments, a picturesque old town and beautiful beaches attract tourists to visit - Rønne is a pillar of the island. It houses a cinema, a theatre (founded in 1823), an indoor swimming pool, a stadium and consulates. The city has the largest and most important harbor on Bornholm, with ferries from Sassnitz, Køge and Ystad.

The origins of Rønne date back to the 13th century when Aakirkeby was the island's capital. Construction of the city began in 1327 by German merchants associated with the Hanseatic League. In the same year, Rønne was granted a charter. In 1512 the Latin School was established in the city. Rapid development under Lübeck rule was halted when the Swedes took over the island.

The city gained importance in the 18th century thanks to the sea trade. At that time, the expansion of the port began, which grew at a rapid pace. At the end of the 18th century, Rønne became the island's main city, and in 1786 the Bornholm court was moved here. In 1866 a steamboat connection was established with the Swedish city of Ystad. Shortly afterward, the lighthouse was enlarged and built.

At the beginning of the 20th century, Rønne was connected to Nexø by rail, and several years later to Allinge. In May 1945 the town was bombed by Soviet air forces. Most of the buildings were destroyed. After the bombing, 225 wooden houses were built in Rønne with the help of Swedes, some of which still exist today. You can learn more about the history of Rønne and Bornholm at the Bornholm Museum, which houses the famous gold plates with engraved characters from the 6th century. The 17th-century citadel houses the Military Museum, which has one of the oldest cannons in Denmark, dating from 1555.

Rønne's most interesting attractions include an old harbor forge from 1735, a lighthouse from 1880 and the city's smallest house on Vimmelskaftet.

The old port forge - located by the harbor, is a characteristic red half-timbered house with blue-painted gates and shutters. This historic building was built in 1735 as a warehouse for storing ammunition. Today it is occasionally opened and shows are held for tourists.

Lighthouse - the characteristic white lighthouse can be seen from very far away. It was built in 1880 over the harbor basin and is a copy of the lighthouse in the port of Ystad in southern Sweden. The lighthouse was in operation until 1989 and served as a directional light at the entrance to the harbor.

Sct. Nicolaus Kirke - St. Nicholas Church is located on a hill just above the harbor in Rønne.It is one of the first things to see when you sail to Bornholm and head for Rønne. The present church has its appearance since the completion of the rebuilding in 1918.

Bornholms Museum - The mission of the Bornholm Museum is to preserve, study and disseminate Bornholm's cultural history. Here you can learn about the history of the island and its people from prehistoric times. Next to the museum building, in the garden, is a shelter from the Second World War.

Little house in Rønne - The 25 square meter house at Vimmelskaftet 11 is the smallest house in Rønne. It has a distinctive blue door with small wooden steps leading up to it, the house is part of one of the nicer places in Rønne.

Erichsens Gård - located on Laksegade, this is a perfectly preserved house that belonged to the merchant Thomas Erichsen. He lived there with his family. The house has furnishings from the 19th century and there is a small garden around the house where cultural events are held during the summer season.

Hjorts Stentøj - is a ceramics museum on Krystalgade Street. Clay objects are made there and can be bought in the museum shop. If you buy a ticket to these three museums at the same time, you get a discount.

Forvarsmuseum - is a museum where exhibits from the Second World War can be seen. There is also a well-preserved defense tower from 1679. 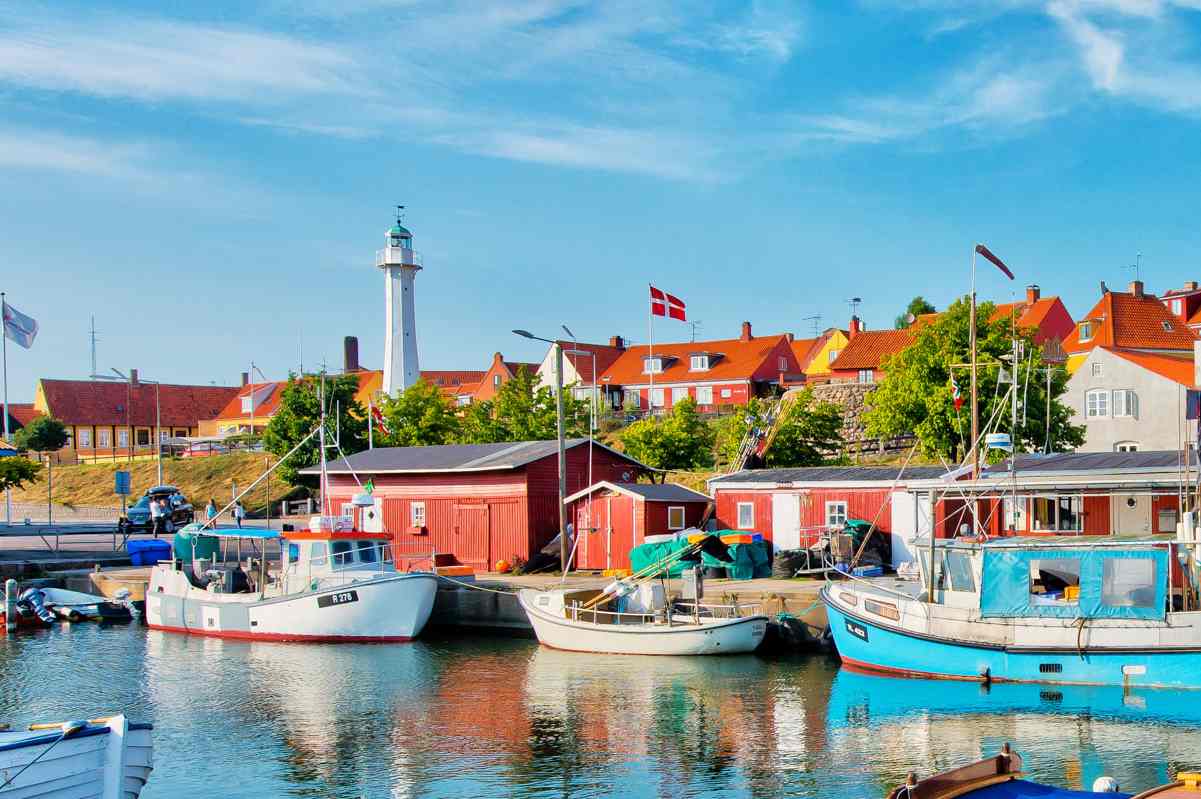 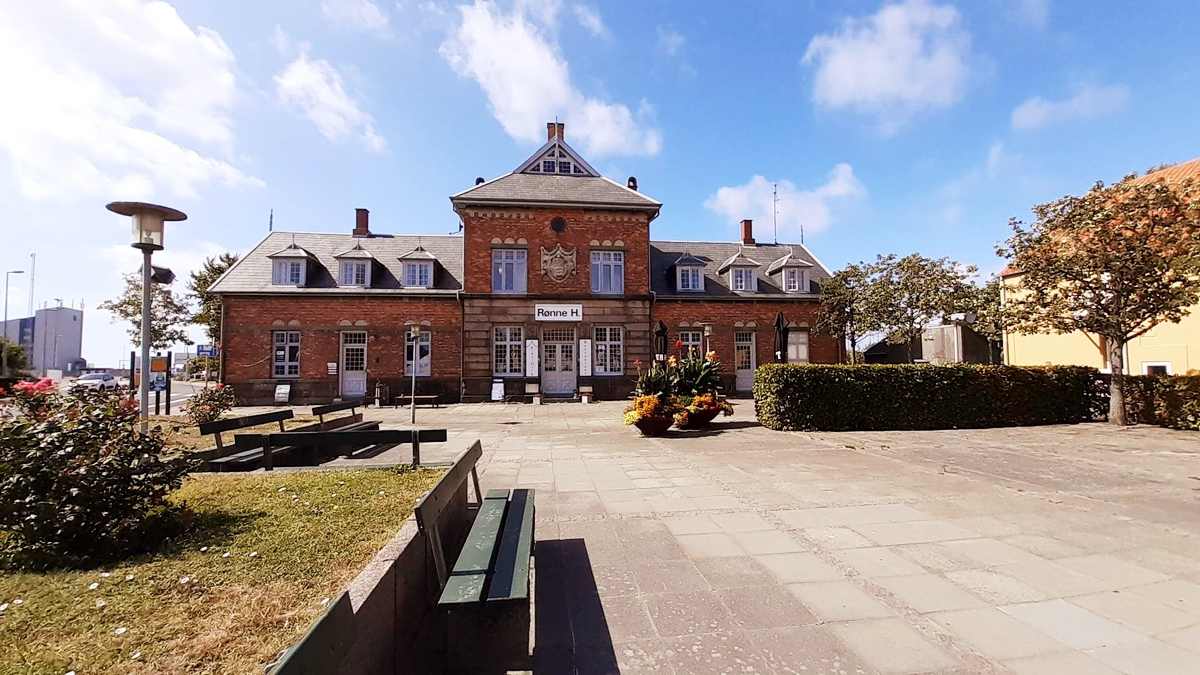 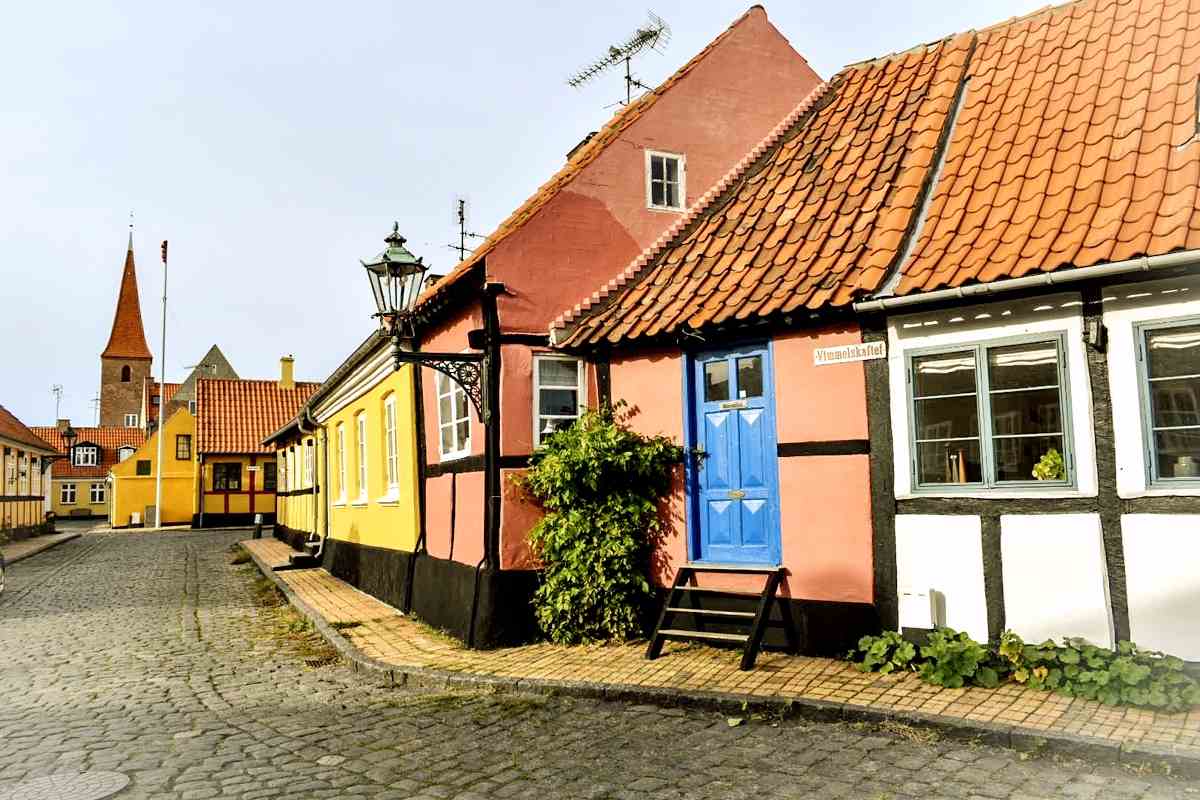 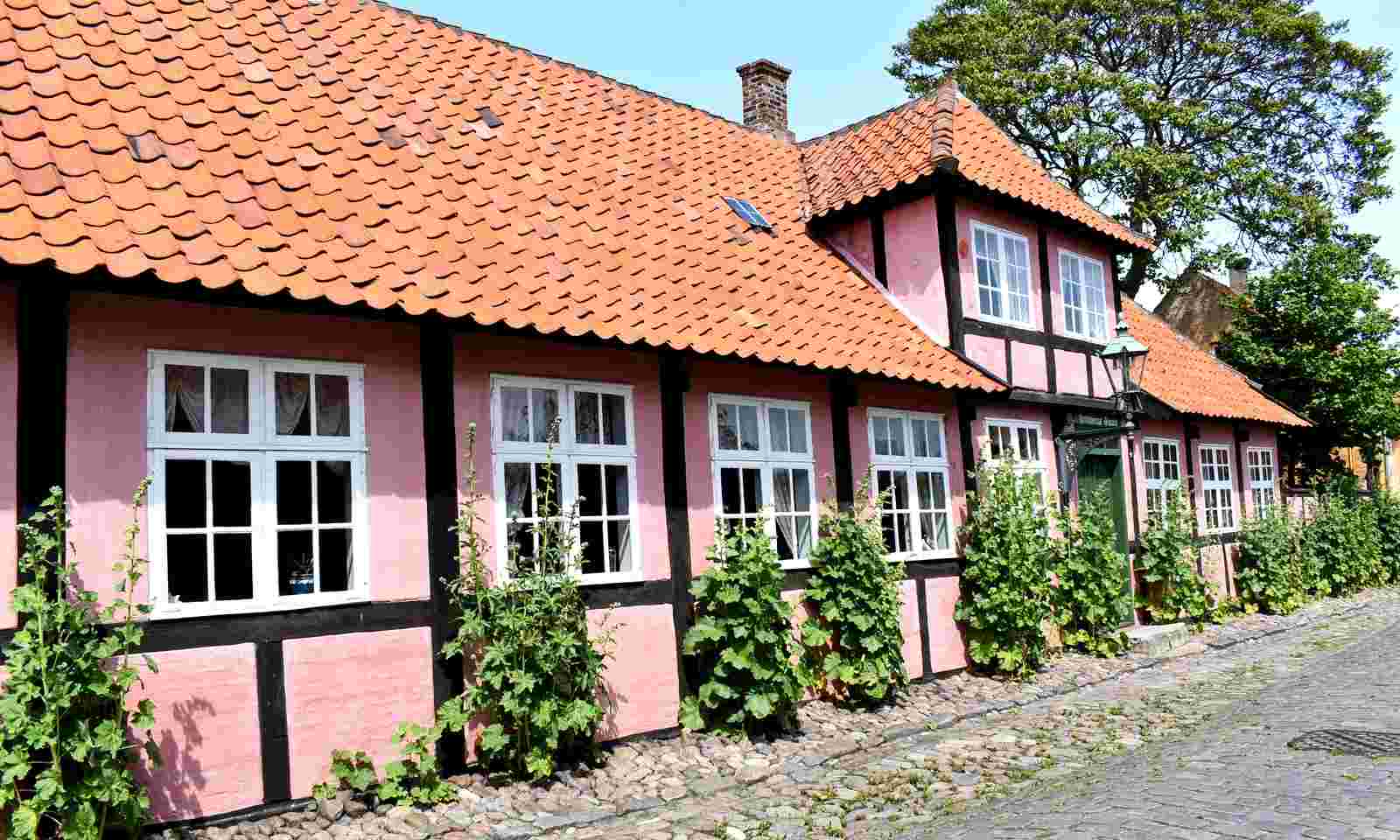 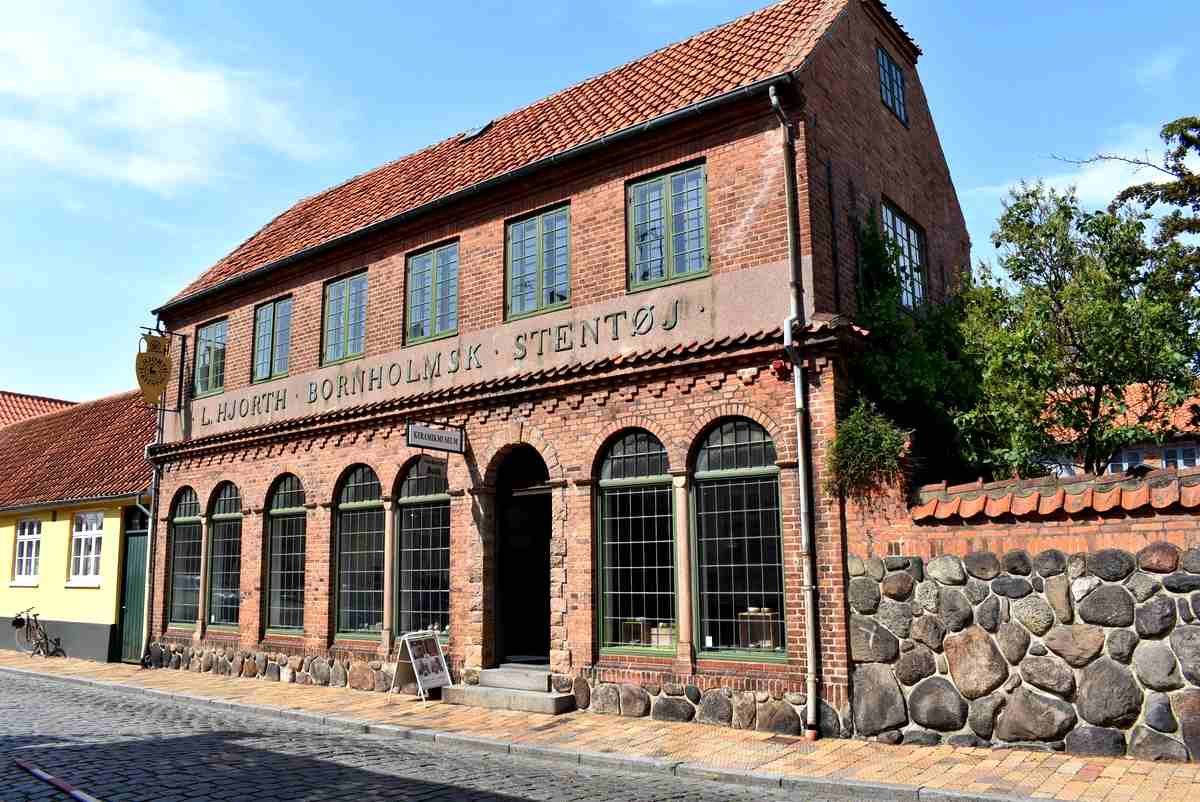 Arnager - is a small fishing village on the south coast of Bornholm, near the airport, a few kilometers east of the capital Ronne. It is probably the oldest village on Bornholm. Arnager can proudly call itself "the place with the longest wooden bridge in Denmark".

Nyker - is a small town northeast of the island's capital, Rønne. The round Nyker Kirke, with its 2 floors, is the smallest of the four round churches on Bornholm.

The village is approximately 6 km from Rønne

Nylars - is another round church on the island. It is located in Nylars in the southwest of Bornholm, near Rønne. Many tourists describe this church, built around 1160, as the most beautiful of the four-round churches on Bornholm. 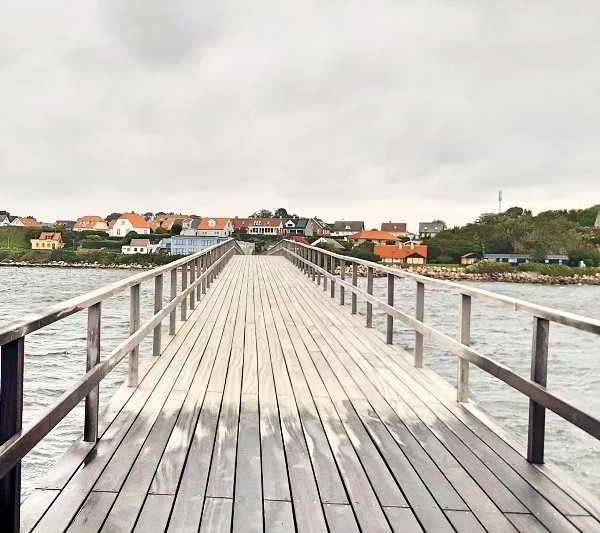 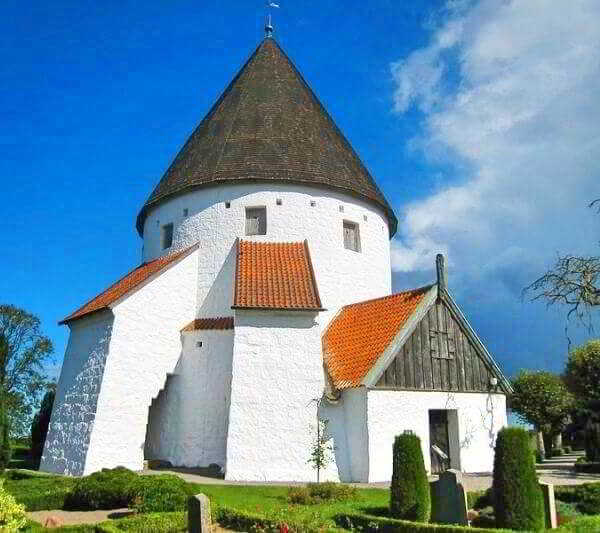 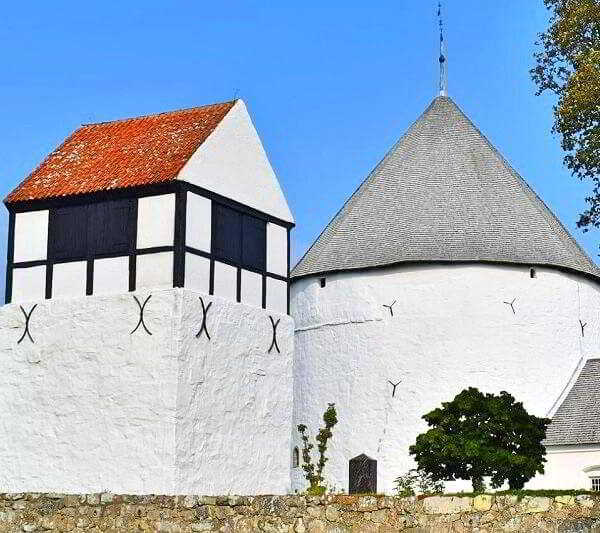