The most beautiful beach in Northern Europe

Dueodde is one of the most beautiful and famous beaches in Denmark and Europe. The sand on Dueodde beach is considered to be the most beautiful in the world and has been used to make hourglasses. The water is clear and clean, but the depth varies slightly as there are many reefs in the water. The beach stretches for several kilometres on both sides of the southern end of the island. It starts in the cosy village of Snogebæk, which is a charming fishing village and a popular holiday home district. Here the beach is narrower, but as holiday guest we have almost the whole beach to ourselves.

At the southern end of the island, the beach is several hundred metres wide and there are many dunes and hollows where you can find shelter and lie down on a blanket in the sun. At Jomfrugaard the beach becomes narrow again but is quieter. The beach at Dueodde and Jomfrugaard offers good waves when the wind blows from the southwest. Here we have many opportunities to challenge our limits with kite and windsurfing.

Dueodde is a holiday resort

Dueodde is a large area of holiday homes, camping sites and campsites, so if you love having your "own" home, but at the same time being close to the beach, nature and many attractions, life and activities, then Dueodde is the perfect place. In Dueodde itself there are several ice cream parlours and smaller restaurants, but for everyday shopping we have to go to Snogebæk about 5 or to Nexø about 10 km.

From the car parks on Fyrvej and Skrokkegårdsvej, wooden ramps over 500 m long have been routed through the dunes, making it easy to take a bike or reach the beautiful beach in a wheelchair. Be warned, however, that the ramps can be dusty and end more than 100 metres from the water's edge. The car park at Fyrvejen also has a kiosk, toilets and a bus stop.

From Dueodde lighthouse you can see Bornholm from above. At 47 metres high with 196 steps, the lighthouse is the highest in Northern Europe. When you climb the lighthouse, you can enjoy the view of the sea and a large part of Bornholm. 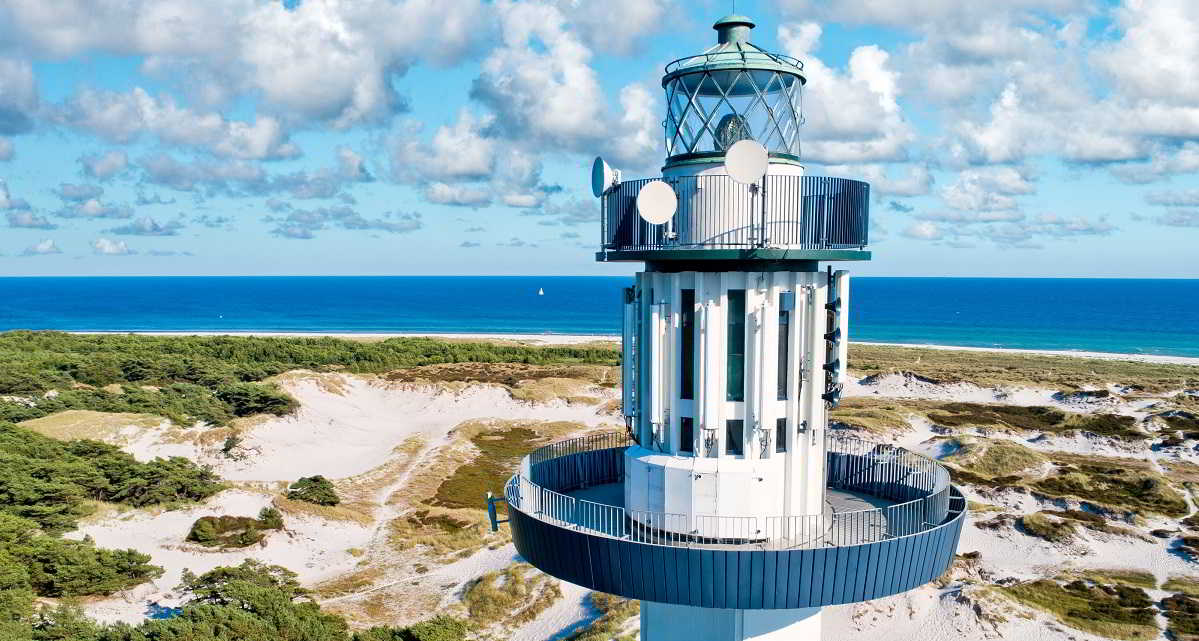 And what does the nearby Dueodde forest hide?

In Dueodde pine forest we can experience beautiful nature and see remnants from the war, two cannon bunkers from the Second World War. The intention was to set up cannons at this location, which were intended to face east. However, they were never set up. The bunkers are still here and there is access to them along Skrokkegårdsvejen.

We can also visit the Bornholm Tower. Here you will see the former listening post of the Armed Forces Intelligence Service, which has been opened to the public and decorated with exhibitions of photos, films and machinery from World War II and the Cold War. The 70-metre-high tower offers an absolutely fantastic view of Dueodde and the eastern part of Bornholm. You can choose to walk over 400 steps to the top or take the lift up there - either way, it's an experience worth trying.