The village of Arnager on Bornholm

The small fishing village of Arnager is located on the south coast of Bornholm, close to Bornholm's only airport. Only about 150 people live in Arnager, probably the oldest village on Bornholm. In the summer there are many holidaymakers, who appreciate the quiet and pleasant atmosphere of the village. Arnager can proudly boast "the longest wooden bridge in northern Europe".

The symbol of this place is the wooden bridge, which is located by the beach and connects the village of Arnager with the harbour. This wooden bridge is the longest bridge in northern Europe, its length is over 200 metres. The harbour was built in 1884. A similar harbour, but with a slightly shorter bridge, can be found in Snogebaek. 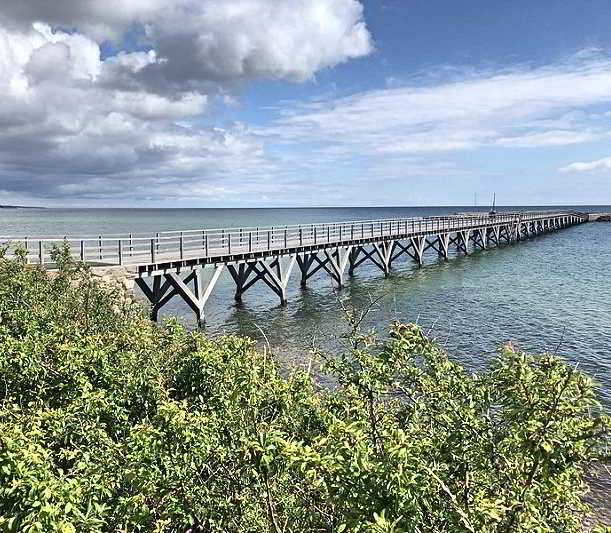 Today holidaymakers enjoy the long and sandy beach, which in summer is rarely so crowded that you have to look for a quiet spot. Here you can take long walks on the beach along Arnager Bay to the cliffs. The Arnag limestone from the Upper Cretaceous period towers up to 20 metres high and contains many fossils. Traces of dinosaurs have been found here. Anyone interested in the geology of Bornholm should visit the interesting exhibition at NaturBornholm museum.
There is an airport near Arnager. But don't be alarmed by the noise of the planes landing and taking off, as there is little air traffic on Bornholm and the arriving planes are mainly small. However, you can enjoy lying on the beach and watching the planes fly low overhead.

From Arnager you can quickly reach Rønne via a paved path. There are many historical monuments, such as Nikolai Church, the Rønne Theatre and the Bornholm Defence Museum. There are a few small shops in Arnager, so it is better to go to Rønne for shopping.
On foot, you can also take a walk north to Nylars. The small town is only a few kilometres from the village, which offers a unique attraction - one of the four-round churches on Bornholm. On the way, at the northern edge of the village, we pass a grave, a burial site that is about 5000 years old. The mound lies in a field and is clearly visible.

A brief history of Arnager

Already the Vikings appreciated the good location of Arnager and chose this place to settle. Situated naturally on a steep slope on the south coast of Bornholm with a flat beach and good inland settlement areas made Arnager an ideal location. At that time Rønne was still an uninhabited marshy area.
According to Bornholm Place Names, Arnager was first mentioned in 1552 as "Arenack". Later names include Arnicke, Arnikke, Arnagge, Arnagger, Arnach, Arn-Agr, Aren Ager and Ahrnager and various forms of Arnager. For some time the village was one of the main resting places for missionaries on the island.

A large naval base was planned at Arnager, but the decision was changed and the fortress of Rønne and Christiansø was built.
Due to the lack of a harbour in Arnager, the fishermen from the local village were forced to fish with smaller boats that they were able to pull ashore. This changed in 1851 when a harbour was built here. However, the harbour soon stopped serving fishermen because it was too close, i.e. 50 m from the shore, and it quickly became shallow and unusable. The harbour had to be extended again only 10 years later. The remains of the harbour can still be seen to the west of the new harbour, which was built between 1883 and 1884 and was connected to the mainland by a 200-metre long wooden bridge.

There is also a traditional smokehouse on the edge of the fishing village, just off the airport strip. It is a family business that runs a small restaurant for families. There you can enjoy all the fish dishes as well as meat dishes.