Top 10 places to visit on Bornholm

Find your favourite place among the most popular attractions on Bornholm

There are many unique attractions on the island. It's impossible to list them all, so find your inspiration for a trip around Bornholm's charming corners, and along the way get to know Bornholm's culinary culture and friendly locals! Many of these places are open all year round.

Explore the top 10 places to visit on Bornholm

The picturesque ruins of the medieval Hammershus Castle are one of the biggest tourist attractions on the Danish island of Bornholm. The fortress was built around 1250 by Jacob Erlandsen, archbishop of Lund (present-day Sweden). The fortress is situated at the northern end of the island, on the steep slopes of the Hammeren granite massif.
There is an amazing view of the high cliffs, Hammershus Visitor Centre and the camel head and lion rock formations at the foot of the steep cliffs.
With a bit of luck and good weather, we will see the Swedish coastline some 40 km away. Hammershus is today Bornholm's most famous attraction and can be visited free of charge all year round. 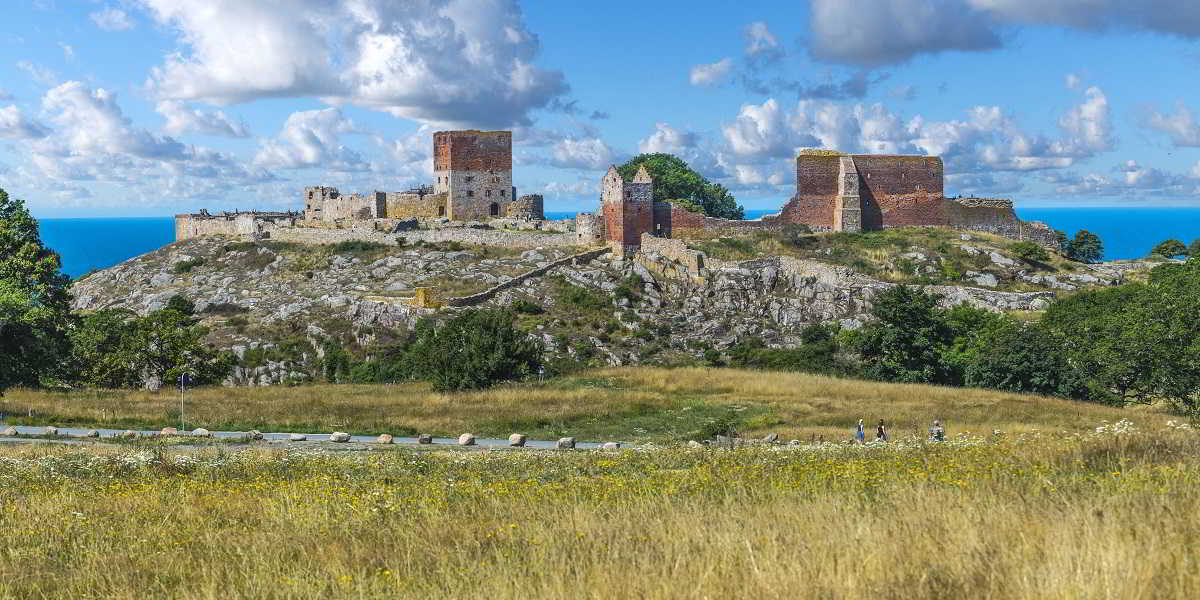 Lake Opalsø is the remains of a quarry, from the turn of the 20th century, which was the largest granite export depot. Here there used to be a large granite mining industry, which was shipped from the newly built port of Hammerhavn. At the top of the cliffs surrounding the lake you can sit and enjoy the views of the relaxing green waters, the ruins of Hammershus Castle or the picturesque village of Sandvig with its sandy beach. The steep quarry walls surrounding Opalsø are a well-known place for rock climbing.

Hammersø Lake is the largest lake on Bornholm, with an area of 10 hectares and a maximum depth of 13 metres. The lake is adjacent to Lake Opalsø, between the rocky junction of Hammeren and the rest of the island. 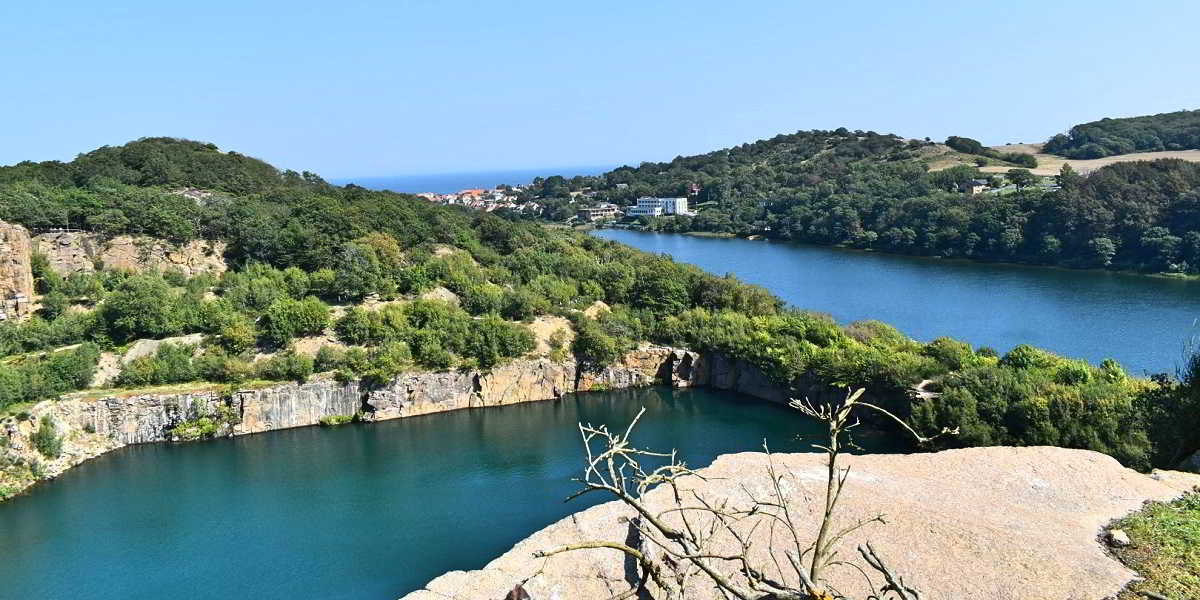 Lakes and moors on Bornholm

Christiansø is a small Danish island in the Baltic Sea about 20 km north of the coast of Bornholm. At only 22 hectares (710 metres by 430 metres), it is the largest island in an archipelago consisting of a number of islets and rocks called Ertholmene.

All buildings on the island are under strict protection and new construction is completely prohibited. Among the monuments worth mentioning are the Rantzau Bastion, the Big Tower (Store Tårn), the Little Tower (Lille Tårn), the royal garden, the church and the defensive walls.

The island can be reached by ferry from Gudhjem. 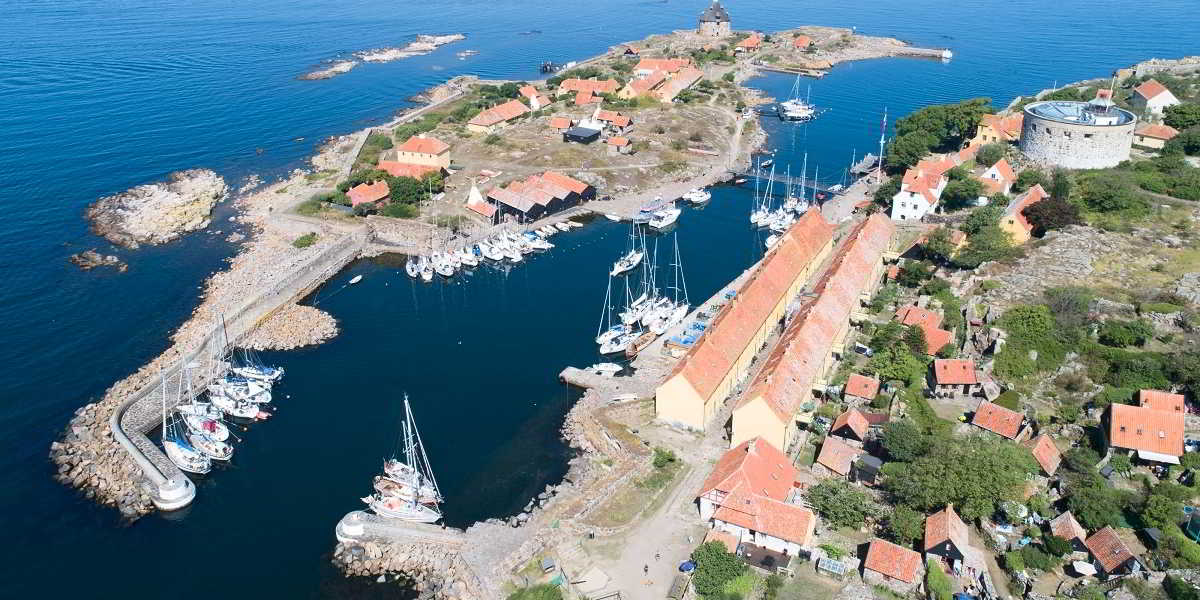 Dueodde beach at the southern end of the island is considered one of the most beautiful beaches in Europe. Several kilometres of wide, sandy beach are ideal for sunbathing enthusiasts. The beach is separated from the mainland by magnificent dunes, which stretch even further into the island. The dune area was once even larger, but part of it was planted with pine trees and grasses in the 19th century. For great views of the dunes, beach and sea, just climb the 47-metre-high Dueodde lighthouse.

Two gun batteries, built by the Germans at the start of World War II but abandoned before they were completed, are hidden in the pine forest behind the dunes. 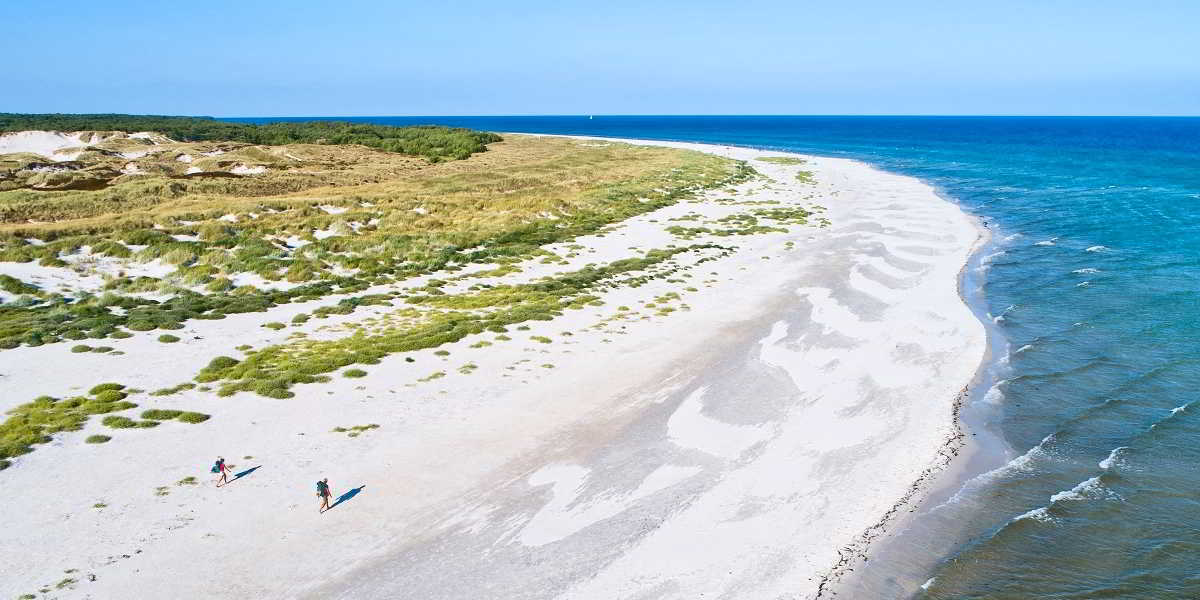 Bornholm's rotunda churches are today one of the most interesting tourist attractions on Bornholm. Originally the churches were also used as defensive structures, as evidenced by the three-storey structure (except for Ny Kirke, which has two storeys) and the narrow steps between the levels. The lowest floor of the rotunda is the chapel, the middle floor is where food supplies were stored. The top floor was an observation point, from here also a defensive attack on the enemy was carried out. Built on a circular plan, the four rotunda churches date from the 12th century. 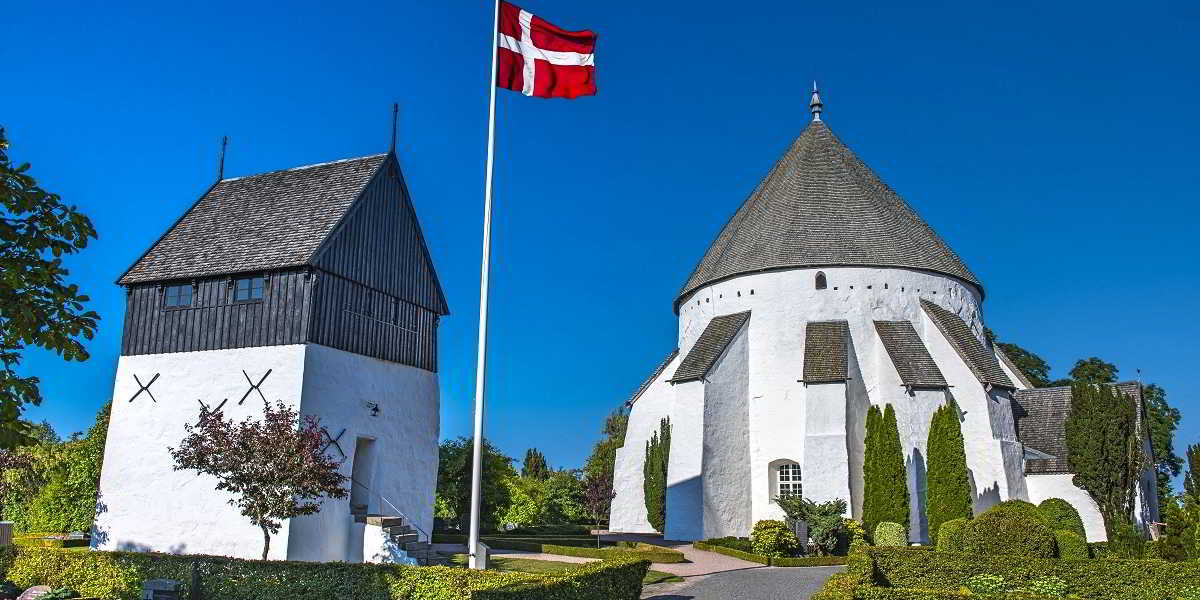 Jons Kapel (John's Chapel) is an impressive rock formation on the west coast of Bornholm. According to local legend, this was the place where, about a thousand years ago, the monk Jon converted the local pagans to Christianity, and preached from the top of a 20-metre high rock called the pulpit. Today, 108 picturesque stone steps stretch along the edge of the rock and lead to it. Near the rock, there are also three small caves where the monk was supposed to live. Each of them had a separate function: a bedroom, a dining room and a cellar. 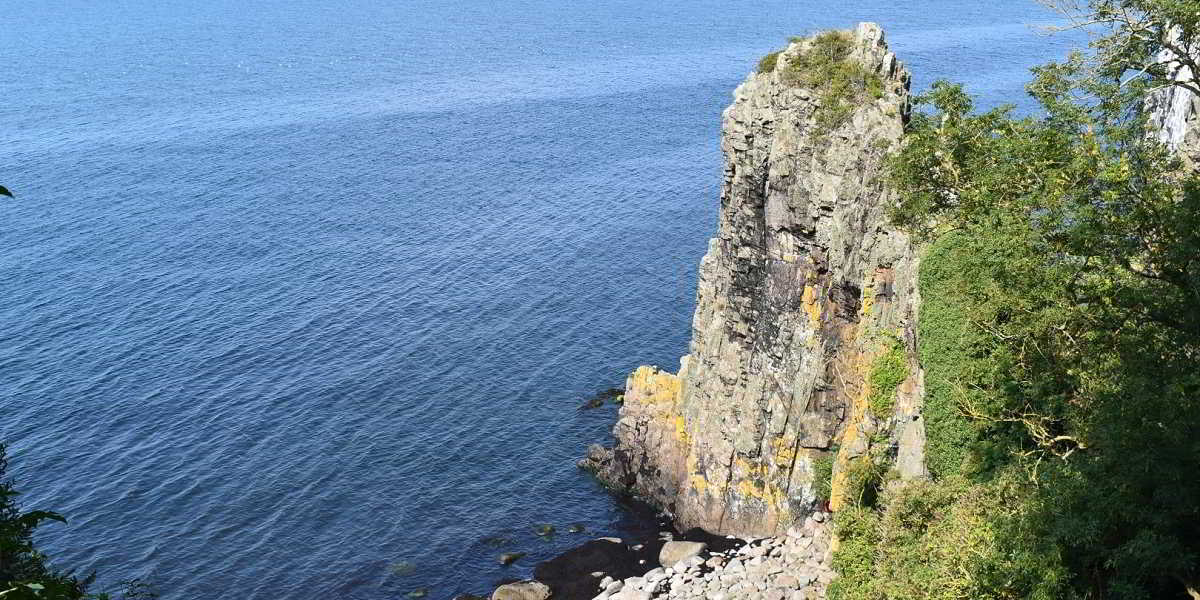 There are many interesting places to visit on Bornholm, and museums are certainly one of them. The museums on the Danish island of Bornholm show the life of the island and its people in many interesting and beautifully designed exhibitions.

Bornholm's museums range from natural history, geology and history to applied arts. The exhibitions, some of which are very modern, are attractive to both children and adults. 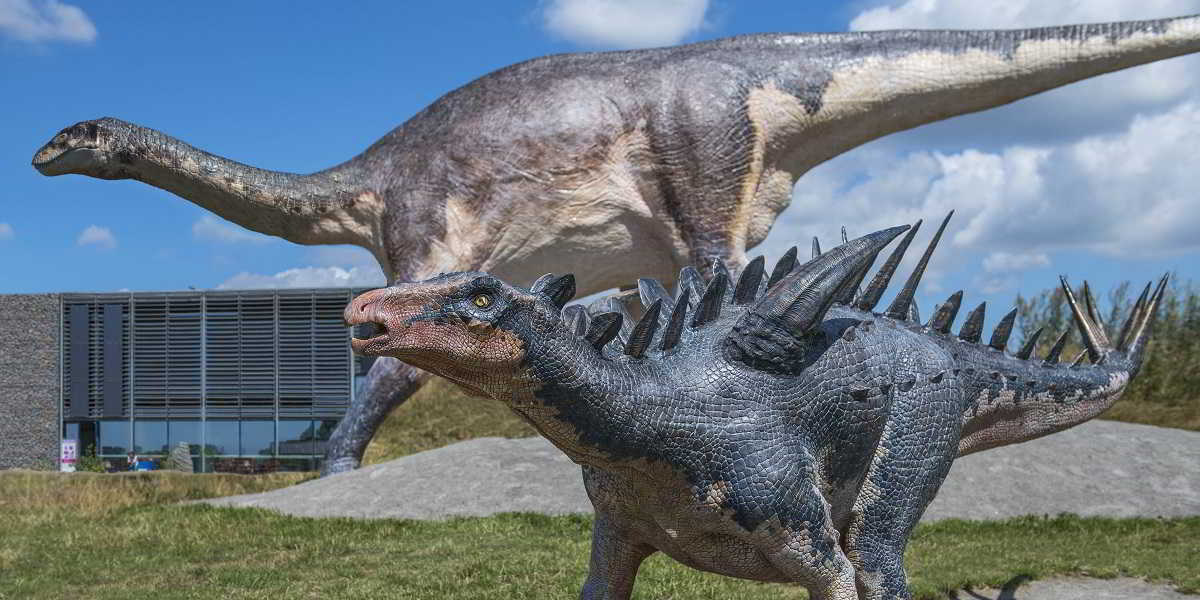 Helligdomsklipperne are several cliffs located in the Helligdommen area, between Tejn and Gudhjem on the east coast of Bornholm. During the Ice Age most of the coast was below sea level, but when the ice disappeared the island rose and this part of the Bornholm coast today is about 20 metres above sea level. 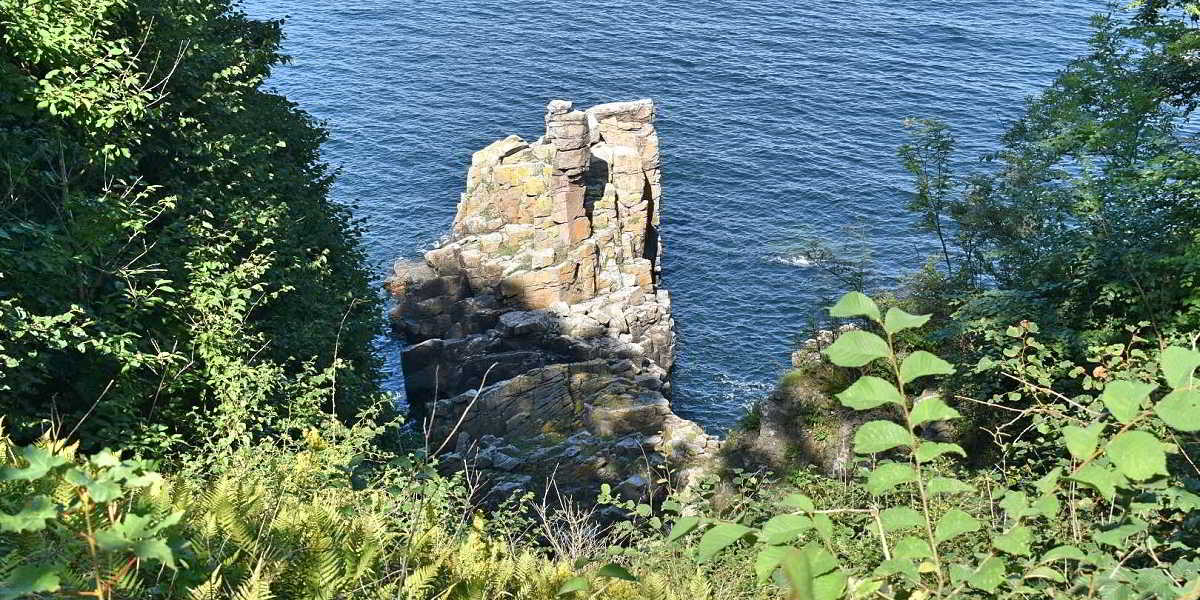 The smokehouses on Bornholm reflect the tradition and soul of this sunny Danish island. Their chimneys can be seen everywhere and are an integral part of the Bornholm landscape. The golden smoked herring is a culinary speciality on Bornholm. Smoking fish on Bornholm has a long tradition. It goes back to the time of Scottish fishermen who stopped here to fish off the then undeveloped rocky island of Christiansø. From there, fish smoking first came to Gudhjem, and then spread throughout Bornholm. 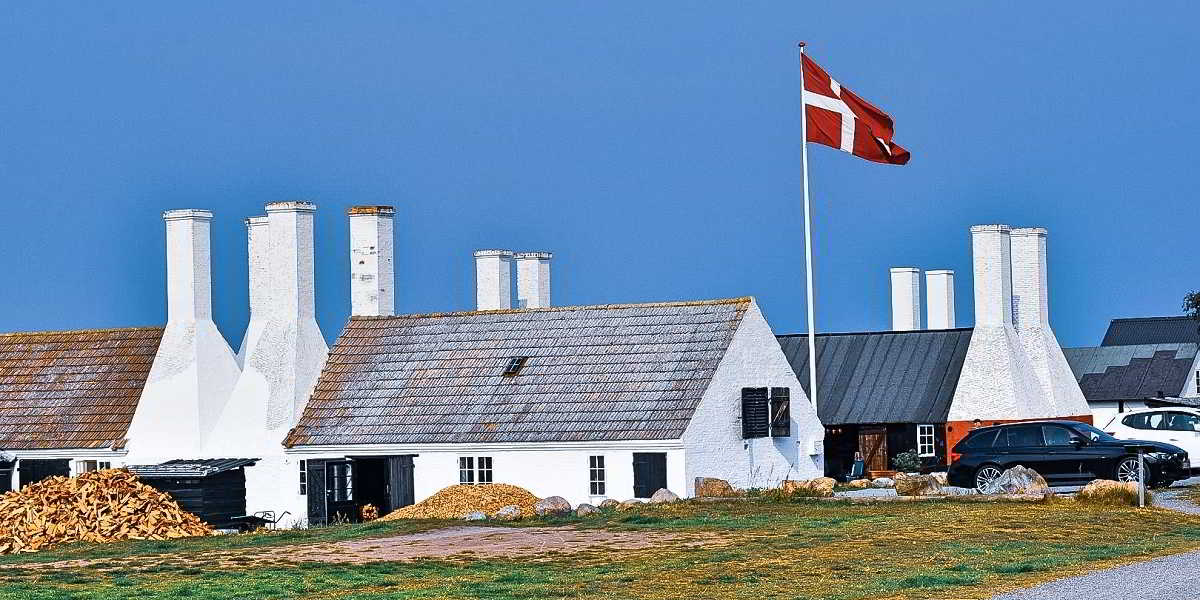 Almindingen Forest is the largest forest complex on Bornholm, and the third largest in Denmark. The forest covers an area of 2400 hectares and is almost entirely artificial. The Almindingen forest has the largest concentration of lakes on Bornholm, the largest of which is Batemose. The Rytterknægten hill is the highest point of the island (162 m above sea level), where one of the MTB cycle routes is located. The Echo Valley (Ekkodalen) is an unusual landscape and the sound possibilities of its specific structure.
Hiking and cycling trails have been set up in Almindingen for visitors to explore this vast area. 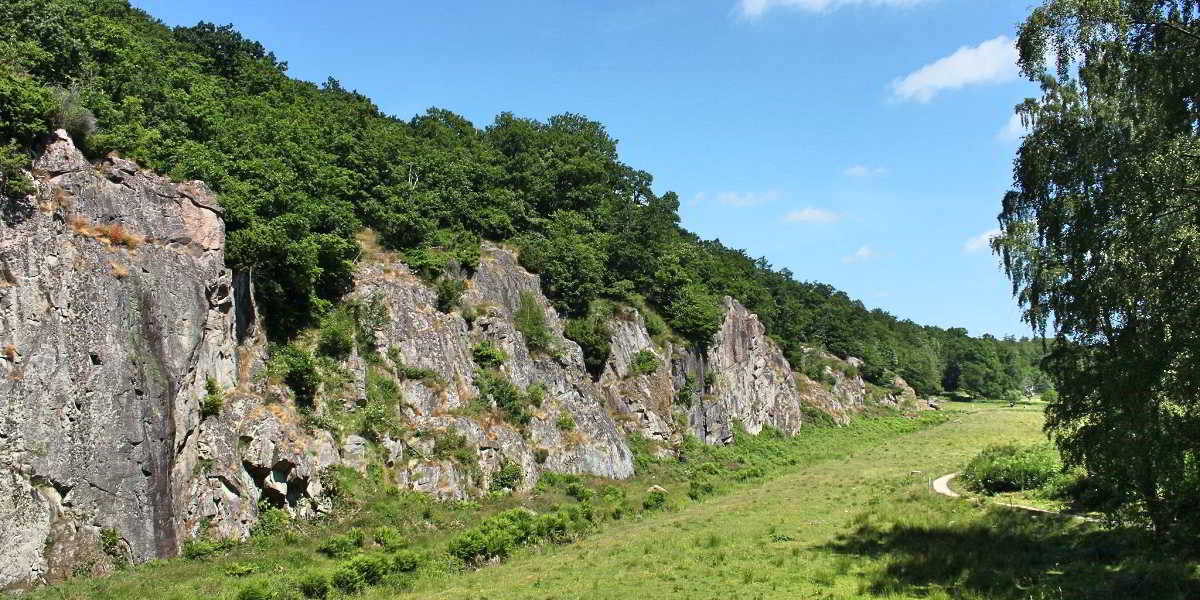